This post is dedicated to my most magnanimous friend James, who has actually had a hand in a lot of my blog posts over the past year or so since I met him at Hamlin dog park in Roscoe Village.

He encouraged me to make peace-offering cookies for my new neighbors when I moved and my dog was being a whiny baby.

He gave me a set of knives (no specific post associated, but I use them a lot).

He split a Groupon to Paulina Meat Market with me.

He gave me a cast-iron skillet!!

In return, I make him the victim of my vegan baking experiments, like these cookies and this bread, etc.

So when he told me that he was having trouble sleeping, I jumped at the chance to finally christen my oven and make him something that employed one of my favorite things. 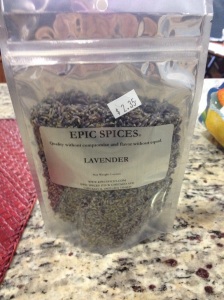 Fo’sho. I love lavender. In my soap, in my lotion, I even use a few drops of lavender oil in my humidifier. I’ve never used it in cooking before, but, as I said, I like to make James the victim of my experiments. I think I just googled “vegan lavender dessert” and found this great-looking vanilla lavender cupcake recipe from veganivore. Also props to Epic Spices up there, a tiny little spice shop in Ukie Village. The product is excellent, the right price, and the owner complimented me for my chosen flavor combo: “Now I’m not up on all my magazine subscriptions, but there must be some lavender citrus trend going on, because people keep coming in here wanting to make some lavender orange simple syrup for their next cocktail party or whatever, so good for you.”

The cupcake recipe I followed to a tee (save for the almond milk, I used vanilla soy). Apparently the original recipe is from the famous Isa Chandra Moskowitz, and it’s a good one. Very moist.

The frosting recipe I had a little more trouble with because the directions are to steep 1/4 cup lavender flowers in 2 tablespoons of water. That seemed, like… impossible. I did the reverse.

Except then the resulting lavender water probably wasn’t as concentrated as it was meant to be, so I ended up adding more of it to the frosting mixture to really get the lavender scent, which threw the whole consistency off and I ended up having to dump a load of cornstarch in so that it would set.

I mean “vanilla lavender cupcake” just sounds pretty, doesn’t it? I didn’t want it to end up being another sloppycake mess.

The cornstarch did the trick though, and with some red and blue food coloring, the result was possibly the most photogenic thing I’ve ever made. 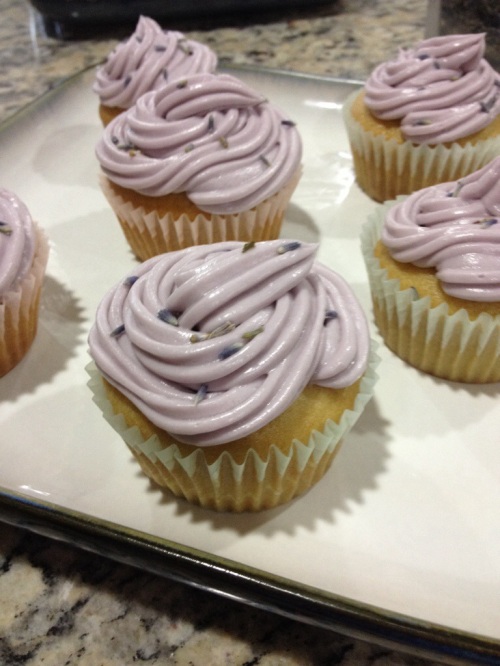 The original recipe also calls for agave syrup drizzled on top so the lavender flower buds stick, but I just used a toothpick to gently push them into the frosting. Then I put the cupcakes in the fridge for additional setting.

I personally felt like I could taste the massive load of cornstarch in the frosting, but it was still pretty good, and James enjoyed them 🙂 . And since I still have a good amount of lavender left, I could probably try my hand at the frosting again at some point…

Or maybe just save it for a craft cocktail.