Hey man, sometimes you need a month or 4 off. I was pretty busy with my old job and then a new job, so I haven’t been doing a lot of baking. Just some… 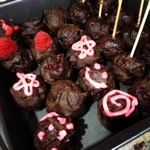 very hard to do with only two hands

banana bread (your basic, your standard), and croissants.

Shopping though, I have done that. Specifically at ALDI. It’s like a chill friend of mine – reliable, cheap date, but full of surprises. I kinda consider myself an ALDI pro now and spread the gospel whenever I can  – which is what I’m doing with this post.

Just as a note, I’ll admit I wrote everything above like 2 months ago (I took an even further hiatus because my computer was too old to cooperate with WordPress). Since then, I’ve become a little more sensitive to what I feel is a very high sodium content for their prepared foods. But their produce is a steal and they do carry some brand names from time to time. And, perhaps most importantly, they cater to dietary restrictions (on the cheap). I mean look at these cookies! They’re pretty much a replica of Enjoy Life’s soft-baked cookies. I can’t tell you how much they are, but it’s probably a good deal.

I DO know the price of the their soymilk. I go through a gallon of it a week, and on average, a half gallon will run you about 3.99 to $4.29 (according to Google search). But organic soymilk at ALDI is $2.29!

Something I used to get at ALDI all the time was their coffee. Check this out:

No joke though, it tastes exactly like Dunkin Donuts coffee, a pound bag of which costs $8.99. This stuff was………..$3.99!! MIND BLOWING. Except that I don’t think they carry this blend any more, I haven’t seen it in a while.

And just going through the receipts I saved for this blog post (meaning they’ve been on my desk since the summer), there’s some other unbelievable deals. Like a half-pint of blueberries for $1.29, a 20oz box of raisin bran for $1.79, a can of black beans for 60 cents, and so on. When I was shopping there regularly, I was spending between $50-$60 on a couple weeks worth of groceries, saving at $30 compared to if I had bought all of the same items at Mariano’s. I probably could’ve been spending even less, but those deals are so tempting that I left with stuffed cart every time.

Like I said above, some of their processed food is full of sodium. I wouldn’t recommend the soups, or even the bread. But produce, special-diet items, pantry items (A1 KNOCKOFF STEAK SAUCE FOR A DOLLAR), non-food essentials like paper towels and household cleaners, even fish oil capsules (!), you absolutely cannot beat the price. And that’s why I’m glad I discovered my new friend ALDI.